During my forays into the local faith community in 2015 I experienced an intriguing mix of sights, sounds, venues and celebrations. This week I’ll briefly describe some that made lasting impressions. Next week I focus on my perennial quest regarding what I’d like to see churches tackle in 2016.

These impressions are mine alone, and omission isn’t intended as a slight to any faith-based organization in Anchorage.

As the years go by, I’m increasingly enthusiastic when local faith organizations and their members go out of their way supporting charitable causes such as Thanksgiving Blessing, Crop Hunger Walk, food banks and food distribution programs, kids programs, etc. There is sufficient need in our community, and these efforts show that, for the most part, Christian organizations walk the talk. When Christ Our Savior Lutheran Church periodically holds two-hour Beer and Hymns events, more than $5,000 is raised for Lutheran Social Services of Alaska. Church food drives are incredibly successful too, such as when St. Mary’s Episcopal Church collects donations of more than 4,000 jars of peanut butter plus other food items during the year.

The Archdiocese of Anchorage held several important celebrations this year. One marked the 100th anniversary of Holy Family Cathedral, and the 50th anniversary of the Archdiocese of Anchorage. Many artifacts of local church history were on display, accompanied by colorful presentations by many local Catholic leaders. The ceremonial Mass at Our Lady of Guadalupe marking Archbishop Roger L. Schwietz’s 75th birthday (and 25th anniversary of his ordination as bishop) was full of music, co-celebrating archbishops and bishops, and many priests. The investiture ceremony of the Royal Equestrian Order of the Holy Sepulchre, presided over by a cardinal, was a spectacular peek into church history.

The Eagle River Institute at St. John Orthodox Cathedral during August afforded opportunities to learn about orthodoxy, and its history, especially Syrian-born Rev. George Shaloub’s lectures on Middle Eastern Christianity. With the Syrian refugee crisis in the headlines at the moment, it’s too bad more local Christians did not hear his messages. Vespers, held after supper each day, provided music and liturgy harking back to apostolic times. A recent visit to St. Tikhon Orthodox Church delighted me. The hour and a half liturgy was supported by an all-male choir singing in four-part harmony. The Russian Christmas celebration at St. Innocent Russian Orthodox Cathedral was filled with music and liturgy, my first experience with starring, a beautiful Orthodox tradition brought from Ukraine.

New churches (church plants) meeting in middle schools were a pleasant visit focus. Clark, Begich, Wendler, and Hanshew middle schools were the focus of those visits. They pay a standard Anchorage School District rental rate for use of the multi-purpose room for adult meetings and classrooms for the younger kids. Churches must bring everything needed and set up every Sunday, taking it all down after, but it works beautifully. Many of these locations provide better settings than some of our local churches. In each of these services, the proportion of millennials was greater than in an average church. I’ve been personally blessed by the number of these services I’ve attended, never feeling the absence of a dedicated brick-and-mortar church as a disadvantage.

Earlier this year, Anchorage Faith and Action Congregations Together challenged the state Legislature with words and prayer at the Legislative Information Office to expand the Medicaid system on behalf of the working poor who slip through the cracks. AFACT, a local coalition of 14 local congregations, worked tirelessly on behalf of expansion. In the end, expansion of the health-care program did happen. When I attended the AFACT celebration at St. Anthony Catholic church in early fall, I was impressed with the passion this dedicated group expressed. I was especially taken with Pastor Julia Seymour’s remarks referring to “social junk.” She’s right. It’s so easy to criticize and ignore those among us we regard as not worthy of our consideration. However, everyone counts in our society, or it begins to rot from the center.

Longevity of senior pastors in our community

My interview with All Saints Episcopal’s Rev. Norman Elliott as he reached his 96th birthday was a true delight. His tireless devotion to his church, and the spiritual lives of those in our hospitals, should be an inspiration to us all. It’s not often we get to know a living church legend; Elliott certainly fits the bill. His stories of pastoring and teaching in the villages, coupled with flights of daring in the parish airplane, are fascinating. Whenever he digresses into the poetry of Geoffrey Anketell Studdert-Kennedy, which he manages to slip into most sermons, he becomes a different man. Elliott is devoted to God and to his church. Retired Archbishop Francis T. Hurley celebrated his 45th year as bishop this year. I’ve had the privilege of interviewing him several times, and like Elliott, he was a flying priest who ministered to a far-flung area. Both have interesting tales of serving God by airplane. The Shiloh Missionary Baptist Church celebration of Pastor Alonzo Patterson’s 45th anniversary as their pastor and 66th anniversary of being a pastor was a warm and effusive display of love for their pastor. Many guest pastors were on hand to add their congratulations and thanks to God for Patterson’s many years of service. The musical tributes were warm and from the heart. It was an exceptional event to have experienced.

Chris Thompson is a religion scholar who visits local churches and writes about his experiences and matters of faith on his blog, churchvisits.com.

The views expressed here are the writer’s own and are not necessarily endorsed by Alaska Dispatch News, which welcomes a broad range of viewpoints. To submit a piece for consideration, emailcommentary(at)alaskadispatch.com.

It’s extremely unusual to read a headline like that these days.

Baptist church consultant Thom Rainer writes in “Breakout Churches” that the average tenure of pastors is 3.6 years. Church statistician George Barna offered a similar figure: “The average tenure of a pastor in Protestant churches has declined to just 4 years — even though studies consistently show that pastors experience their most productive and influential ministry in years 5 through 14 of their pastorate.”

Last Sunday afternoon, Shiloh Missionary Baptist Church celebrated the Rev. Dr. Alonzo Patterson’s 45th anniversary as the congregation’s pastor. (According to Shiloh, Patterson has been a pastor for 66 years). I counted over 10 additional visiting pastors present to offer their thanks and tributes to Pastor Patterson for his long-standing service to Christianity and our community, giving heartfelt tributes to his leadership. In a two and a half hour celebration I was treated to music, tributes, prayers, and hospitality I never receive, much less see, in Anchorage churches. If you’ve never visited Shiloh, I urge that you visit them to see how they exemplify the traits of churches and members I’ve sought in over seven years of blogging and column-writing for ADN. I lost track of the hospitable actions by Shiloh’s members during my time there.

Sunday’s celebration was interspersed with much music. Shiloh’s Voices of Praise was peopled by a colorfully dressed chorus primarily of women, assisted by a few male voices dressed in black. Led by Robert Heartwell, they were accompanied by a six-piece sanctuary praise band. I particularly liked the message of the stunning and heartfelt “Break Every Chain”: “There is power in the name of Jesus, to break every chain, break every chain, break every chain.” Also “God is My Everything”: “God is — God is my everything, He’s my joy — He’s my joy in sorrow, He’s my hope — He’s my hope for tomorrow, He’s my rock — He’s my rock in a weary land, a shelter — a shelter in the time of storm.”

During a beautiful Al Green song, “I Feel Like Going On,” a male voice started singing the lead and fairly quickly people noticed that Pastor Patterson, sitting on the front row with his wife, was singing the lead using a handheld microphone. “I feel like going on, yes, I do; I said, I, I feel like going on, ohh; Ohh, I, I feel like shouting for joy; I don’t know about you; Ohh, I, I feel like shouting for joy, yes I do.” The effect was electric, galvanizing those assembled. Clearly it was a theme song for Patterson’s continuing ministry. The children’s choir sang a riveting, “His Eye is on the Sparrow,” a staple of Sister Rosetta Tharpe, Ethel Waters, and Mahalia Jackson. It was beautiful. Finally, a beautiful rendition of the Donnie McClurkin, Yolanda Adams tune “The Prayer,” was sung by the Rev. Michael Bunton and his wife Nathalie.

Julie Fate Sullivan, and Constituent Relations staffer Sharon Jackson read a letter from Sen. Dan Sullivan to Pastor Patterson. In it, referring to the South Carolina shootings, the senator wrote, “On June 26th, I had the solemn honor of traveling to Charleston, South Carolina to attend the funeral service for the Honorable Reverend and state Senator Clementa Pinckney, which also honored the eight other victims of the heinous acts of violence at Emanuel African Methodist Episcopal Church (AME). I want to thank you, along with Pastor Leon May and leaders of the Anchorage Interdenominational Ministerial Alliance, for setting your time aside to write such a beautiful note sharing your wisdom and prayers with the people of Charleston and the parishioners of Mother Emanuel Church. Prior to the service, I delivered your letter to my friend and U.S. Senate colleague, Tim Scott of South Carolina. He was very moved by all of the expressions of sympathy and wanted me to thank you for him.” (You can read the full text of letter at churchvisits.com)

The Rev. D. Edward Chaney, pastor of Second Baptist Church-Las Vegas, was the featured speaker. After he was introduced, he entered the pulpit to an updated version of the Doris Akers song, “Lead Me, Guide Me.” He sang the lead with a powerful voice. It was a great beginning to a exceptional sermon on Matthew 16:13: “Who do you say I am?” In it he examined who we think Jesus is, and how He affects our lives. I wish I could share a recording of his sermon, but it’s not available. Pastor Patterson clearly loves to preach, and seems to enjoy hearing great preaching too, as he was animated during Chaney’s sermon. Sitting up, he leaned forward to catch every word, raising his hands and pointing in agreement. Chaney’s preaching reminded me of the Revs. Clay Evans and James Cleveland, whose preaching was half talking, half singing. Chaney ended his sermon to the strains of “Send Me,” a Lecrae tune.

Before all adjourned to the fellowship hall for food and drink, Pastor Patterson took time to recognize, by name, the people of Shiloh, a beautiful gesture. He also recognized Dick Sanchez of the Arctic Roadrunner who early on offered Pastor Patterson assistance, monetary and otherwise, to address community problems. Asked to stand, Dick struggled for words to describe what Shiloh and Patterson meant to him. Patterson asked his wife of almost 60 years, Shirley, to say a few words, asking her to keep it brief. She said “thank you” to applause.

Many speakers expressed hopes Patterson would continue on for years. I applaud Patterson and Shiloh for doing so much in our community. This celebration was wonderful, and I was fortunate to participate. (Selected celebration pictures at churchvisits.com)

Chris Thompson is a religion scholar who visits local churches and writes about his experiences and matters of faith on his blog, Church Visits.

The views expressed here are the writer’s own and are not necessarily endorsed by Alaska Dispatch News, which welcomes a broad range of viewpoints. To submit a piece for consideration, emailcommentary(at)alaskadispatch.com. 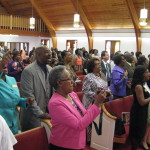 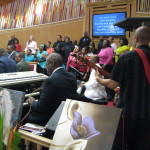 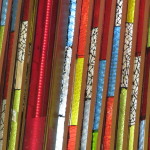 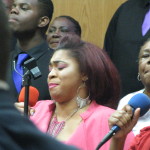 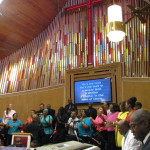 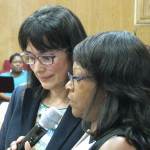 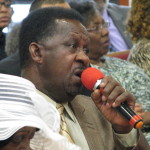 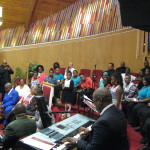 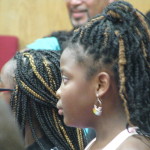 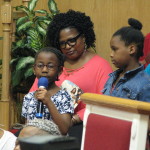 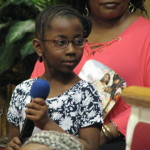 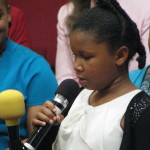 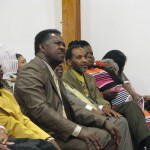 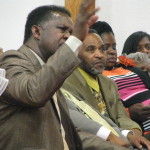 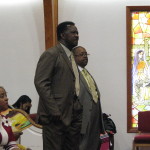 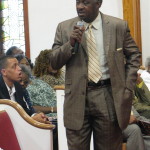