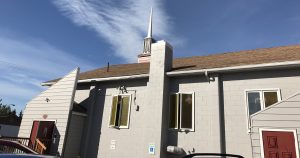 I visited Greater Friendship Baptist Church twice in September (see greaterfriendshipbaptist.org/). This church is not hard to find in its Fairview location at 13th & Ingra. Each time, I was warmly greeted by a number of individuals upon arrival. The first time I was escorted to a pew on the side which offered a view. Several times before the start of their 11 a.m. service, members came up to me, greeting me again and extending my welcome. This is an uncommon experience in most of my church visits. Mostly I get a bulletin and greeting upon entering, and the customary “meet n’ greet” where often true guests are avoided like the plague.

Their pastor, Michael Bunton, previously served at Shiloh Missionary Baptist Church, a church destination I’m fond of visiting for their friendliness to guests and each other. Pastor Bunton and his wife, Natalie, who is known as the First Lady, is the 13th pastor of Greater Friendship. First Lady Bunton is heavily involved in their ministry as deaconess, directing their media ministry, choir director, Bible study teacher for elementary and middle school children, and in their women’s ministry.

My latest visit last Sunday, found the church a bit noisier than I remembered from my first visit. It was raucous with loud conversations, laughing, and noise I don’t associate with the commencement of a worship service. When I hear this much noise, I whip out my sound meter to measure the sound level; it was 100 db, equivalent to the sound of a power mower, power drill, blow dryer, subway, helicopter or chainsaw. My point is that’s a marked contrast to the start of a worship service. In fact, Pastor Bunton was going to be talking that day about “A New Approach to Worship”.

At my first visit, I thoroughly enjoyed listening to their choir. Yesterday the choir did not sing. I asked an associate I recognized from the choir why they were not singing. She said they are periodically encouraged to participate in the service from the member pews, which I think is a great idea. For those churches with choirs, I believe few members understand what a significant time involvement and dedication is involved with choir participation. That said, I love the choir’s contribution at this church. Prerecorded music was played during the various parts of the service yesterday, while the choir sang and a small ensemble played at the previous service I attended.

The services tend to follow a “call and response” form of worship, usually led by the pastor. “Can I hear a witness?” or “Give the Lord some praise!” us usually a prelude to a vigorous applause. This is a major theme during all aspects of the service.  The pastor was led in to the platform by a young girl usher. He started the service by leading the singing the old Baptist hymn, “We Have Come Into His House”.  It was a great prelude to his sermon on worship. The youth function as ushers in this church and were ushering people in, handing out fans, and offering tissues to the congregation.

Scripture and prayer was delivered by a woman member who wiped her eyes first because of the emotional beauty of the song just sung. I’ve rarely heard a more sincere and heartfelt prayer, in any of my local church visits, than what she prayed. She was clearly connected to her God.

Like the previous visit, there was a baptism. Baptists practice full immersion water baptism and children and members of the families of those being baptized were invited forward to the platform to witness the baptism. Nine individuals were baptized yesterday by pastor Bunton. Believe it or not, but the early church practiced full immersion baptism until 1311 when the Roman church changed from immersion to pouring.

After the baptism, people were asked to stand and identify themselves if they were visiting. A packet of information about the church was given to each of them. Personally, I think this practice keeps many people from 2nd visits, but it must work for Greater Friendship; it seems to be part of their church DNA.  A  “meet n’ greet” time was then announced, governed by a countdown clock on the monitors, roughly about five minutes. I was warmly greeted by many, although some of those heartfelt crunches were painful for my arthritic thumbs. (Next time I’ll wear a sturdy hand brace.)

While the offering was taken up, the congregation began to spontaneously sing the traditional gospel song, “I Know it Was the Blood” which in nine verses describes the crucifixion. The pastor joined in with a call and response form of singing. (see lyrics below)

Another prayer was offered at this time, by another woman. It was a spirit-filled prayer that one rarely hears prayed in church services anymore. It was followed by the song “The Battle is not Yours”, sung by a woman who sang sincerely and wonderfully. There is so much talent in this church.

By this time, an hour had passed and it was time for the pastor to speak.  Bunton restated he’d be doing a series on worship, and yesterday’s installment was “What’s Stopping You from Worshiping God?”.  Beginning with Hebrews 10:25, he continued on to pose some key questions about things stopping congregants from worshiping God. He mentioned:

I enjoy Bunton’s method and style of preaching.  He’s a good speaker and has an easy to follow outline for his thoughts. The monitors display his points, and Bible references to them.  He’s very direct, telling it like it is and does not soften the blows.  He is an encouraging pastor helping his congregation to live a more Christian life, and to grow in the knowledge of the word.  They are putting their youth front and center in Christian service.  He said the solution to many of the problems in their neighborhood was not criticizing the youth, pimps, prostitutes, and addicts, but getting them into the church house and into the Word of God.

You can watch the entire 2-hour service through their Facebook link. Apparently they do not feed the audio from the sound system into the live video so it is incredibly difficult to follow as the microphone must be located in the back of the church. I hope they fix this soon, as I find the feed distracting from and otherwise worthy church service.

Bunton ended each service with an altar call, which ultimately included more than half the church. He mentioned that several people he’d hoped would come up didn’t. I heard Rev Patterson of Shiloh Missionary Baptist Church use the same remark at my last visit there.  It’s one of the things that makes me personally leery of altar calls. They come across as being somewhat manipulative.  That’s a hallmark of Southern Baptists and many other evangelical religions.

Overall, I really enjoyed my second visit to this fine, growing church.  I felt more welcomed and accepted there than I do in many of my church visits locally.  They enjoy their music and so do I. If you are ready for a spiritual vitamin B-12 shot, I recommend a visit to this church !

I Know It Was The Blood lyrics