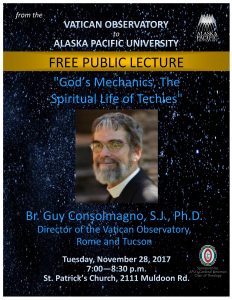 Most religions, and pastors shy away from addressing the dynamics of faith and science. In fact, research studies indicate this failure by the church and their members to discuss faith and science, is a prime reason millennials have lost interest in religion.

It is indeed refreshing to discover that APU’s Regina Boisclair, Ph.D, Professor of Religious Studies and Cardinal Newman Chair, is bringing Br. Guy Consolmagno, S.J., Ph.D. to Alaska to make several presentations on “God’s Mechanics, The Spiritual Life of Techies”.

For a brief, 5 minute, video introduction to this notable astronomer, click here: https://ed.ted.com/on/L5d2wXuE. A lengthier TedX talk is available to watch by clicking here: https://www.youtube.com/watch?v=kmU2gDbP_Tk.

He believes in the need for science and religion to work alongside one another rather than as competing ideologies. In 2006, he said, “Religion needs science to keep it away from superstition and keep it close to reality, to protect it from creationism, which at the end of the day is a kind of paganism – it’s turning God into a nature god.”

On July 2, 2014, he was awarded the Carl Sagan Medal for outstanding communication by an active planetary scientist to the general public by the Division for Planetary Sciences of the American Astronomical Society.  Known as “The Pope’s Astronomer,” he was named by Pope Francis to be the Director of the Vatican Observatory in September 2015.

Come early to claim your seat and have your thinking challenged.